A Second Home, Complete With Mouse

NEVER mind Windsor Castle, or Buckingham Palace with its rooms full of Rembrandts and Vermeers. Forget the royals’ summer digs at Balmoral. Whenever Sue Best and her husband, Malc, travel from their home north of London to their vacation house in Orlando, they’ve got just one castle on their minds — Cinderella’s. 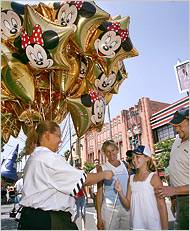 Despite its lack of pedigree, Cinderella’s Castle, with all the other attractions at Walt Disney World Resort, has made Mrs. Best’s heart skip a beat ever since she first visited on a holiday in 1994. The theme parks and sunny climate lured the couple back year after year, finally convincing them in 2003 that they should buy their own castle, a five-bedroom house with a pool in a gated community in Orlando, for $310,000.

Mrs. Best figures she’s been to Disney about 20 times. When crowds are light, the Bests, both 48 and recently retired, think nothing of riding Splash Mountain four times in a row. She looks forward to having friends visit, so she can experience the magic all over again through their eyes. “There is nowhere else like it,” she said as she kicked off her shoes in her beige-carpeted Orlando living room, a breeze blowing through the open patio doors.

Orlando’s theme parks have been a magnet for tourists since Disney World opened its doors in 1971. And as they have swallowed up the old cattle ranches and palmetto, a unique group of second-home owners has grown along with them, joining the traditional type who love Florida single mindedly for its weather. They come from far and wide, and they buy specifically to be near the charms of Disney World, Universal Orlando, SeaWorld Orlando and all their imitators and hangers-on.

After relative stability in the 90’s, prices of homes in the greater Orlando area — a sprawling metropolis of four counties covering more than 3,800 square miles — have skyrocketed since 2001, jumping more than 70 percent from 2002 to 2005, according to the Orlando Regional Realtor Association, in contrast to a national average of 35 percent in those years. Orlando prices rose 32 percent in 2005 alone. The median price of single-family homes and condos in Orlando in January was $242,050.

In the last five years, the area added 140,000 new housing units, including 30,000 condos, according to a report by the National Association of Realtors. And although house prices have recently begun to stabilize and inventory is growing, new construction continues at a fast clip, much of it aimed at the second-home market. Condominium buildings continue to pop up, and vast tracts of the remaining open land are being snapped up by builders of self-contained communities with houses priced well into the millions.

Johanna Haag, a sales associate for ReMax Properties Southwest II in Orlando who has been selling real estate in Orlando since 1980, estimated that about a quarter of the 31,000 homes sold in the Orlando area in 2005 were bought as second homes, a large percentage of them within an easy drive of Disney World.

Some investors buy and resell homes for quick profits, though the returns aren’t as high as they have been. “Between 2004 and 2005, people were making 100 percent on their investments,” said Alice Laughlin, an agent with Olde Town Brokers in Winter Park, 10 minutes north of downtown Orlando. “Now, you might make 70 percent.”

But for the Bests and many like them, profit-taking is not the point.

After several years of twice-a-year pilgrimages to Disney World, the Meier’s of Fort Worth, Tex. — Kris, an information technology manager, his wife, Julie, a schoolteacher, and their two boys, Benjamin, 10, and Nathan, 7 — decided it was time to put down roots. In 2002, they bought a four-bedroom, two-bathroom home with a pool for $140,000 in a subdivision just 15 minutes from Disney World.

On their last visit, the Meier’s headed straight to Disney-MGM Studios from the airport, stayed until late at night and then spent all of the next day at the Magic Kingdom. The next day they hit Universal Studios, and the following day was devoted to Animal Kingdom.

The boys like Buzz Lightyear’s Space Ranger Spin. Their parents have ridden the Rock ‘n’ Roller Coaster Starring Aerosmith at least 10 times. “You can’t do anything but close your eyes and scream,” Mr. Meier said. “When it’s over you feel like you could take on the world.”

Another family of Disney devotees, Gregg and Robin Reid of Crystal Lake, Ill., and their daughters, Lauren, 11, and Nicole, 18, are old hands, making sure to schedule at least one of their four annual trips to Orlando for fall, when the lines for the rides are shortest. Their favorite is Disney-MGM Studio’s Twilight Zone Tower of Terror.

“If there’s no line, we just keep going and going,” Ms. Reid said. “Once we went three times in a row, which is about as much as your stomach can take.”

Americans can be surprised to find international shoppers circling the same Disney-accessible properties they are browsing through. For many, the area is a bargain, especially since the fall of the dollar against foreign currencies.

The Bests figure their Orlando house would be worth $1.8 million back home in England. For the $310,000 they paid, Mr. Best said, “in London, you couldn’t buy a basement room.”

Germans, Venezuelans and Canadians are all frequent buyers, according to a 2005 report by the National Association of Realtors. But the biggest group is the British, who seem to have a particular affinity for Mickey Mouse.

Britons outnumbered all other foreign visitors to Orlando in 2004, including Canadians, at 1.37 million of the 49 million total visitors, according to the latest figures available from the Orlando/Orange County Convention and Visitors Bureau. And when they buy second homes, they are more likely than other foreigners to choose Orlando over beach communities on Florida’s coasts, the national realtors group’s report said.

An area of housing developments near Kissimmee and Davenport, 10 or 15 minutes from Disney, has become a British enclave. O’Doherty’s Restaurant and Irish Pub in nearby St. Cloud could be mistaken for a pub in Dublin, with red-brick walls, 100-year-old oak floors and pints of Smithwick’s, an Irish red ale.

“One night we had only one table of Americans,” said the owner, Teresa O’Doherty, who moved to Orlando 16 years ago from Dublin. “Everybody else was Irish or English.”

As leisure and retirement homes continue to proliferate around Orlando, some of the new developments seem to project their own theme-park spirit. Intrawest, the Canadian-based ski resort owner, chose to name its new 30-acre resort, with restaurants and shops, the Village of Imagine near the Orange County Convention Center in Orlando. Condo hotel units are priced at $290,000 to $650,000.

Bella Collina, a Tuscan-style gated community with more than 800 single-family homes around two lakes, will have its own equestrian center, spa, golf course and 50,000-square-foot clubhouse, all spreading over 1,900 acres in Montverde, west of Orlando. Building lots began selling in the spring of 2004, starting at $300,000. Now the same kinds of lots start in the high $600,000’s and go up to $2.8 million.

ABOUT 40 percent of buyers will use their properties as second homes, said Jim Matoska, an executive vice president of the developer, the Ginn Company of Orlando.

Ginn is also developing the 2,300-acre Reunion Resort. When finished, it will have 6,000 houses and condos clustered around three golf courses and several lakes, as well as tennis courts, stables, restaurants, shops, a spa, walking and biking trails, and a nine-acre water park featuring a “lazy river” and a wave pool. So far, 3,700 homes have been built or are under construction; prices go from the high $400,000’s to $2 million.

Buyers range from parents in their 30’s to retirees, Mr. Matoska said. About a fifth are foreigners, and 60 percent of those are from Britain.

At Reunion, owners have the option of putting their properties into a rental pool. The close proximity to Disney may help them find tenants, although regionally, the rental market has hit a snag.

“Property prices have gone up but rent hasn’t,” said Lesley Dolby of Dolby Properties in Orlando. “The numbers don’t work out like they used to.”

But buyers who yearn to own a home near Cinderella’s may be little disturbed by the vicissitudes of the market. For people like Mrs. Best, brooding about a slow rental season would violate the very meaning of owning a house in Orlando.

While most adults who visit the Magic Kingdom may see the roving Mickey Mouse for what he is — a theme park employee in costume — Mrs. Best is one of those who find it easy to become immersed in the fantasy of DisneyWorld.

“Whenever I go,” she said, “I revert right back to my childhood.”